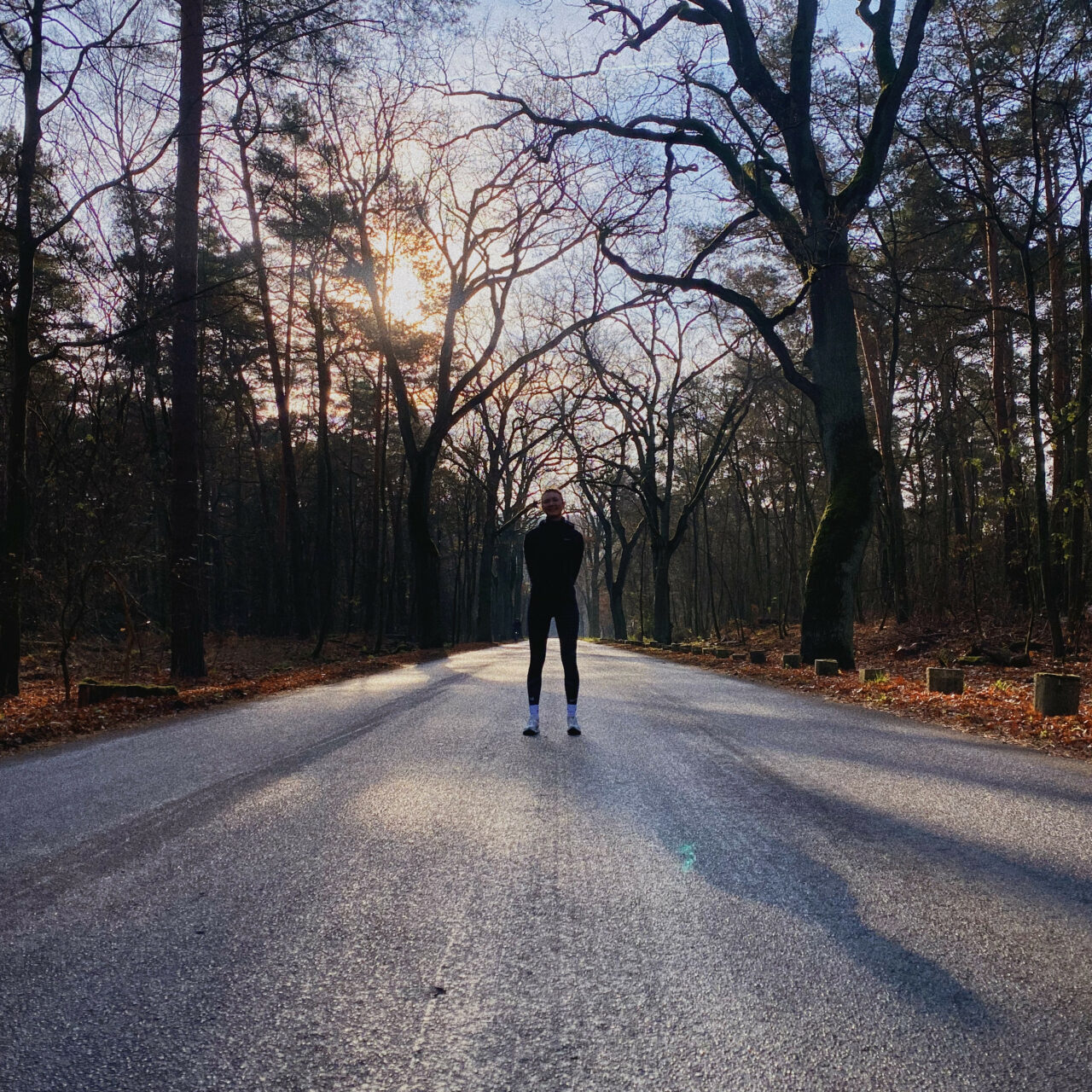 Locals and visitors alike often ask us about Berlin’s best running routes. Guess they think running the city’s streets, tracks, trails and hills for nearly a decade qualifies us as experts on the subject. Maybe it’s true. Still, it’s no easy task. Running routes are as personal as race-day superstitions. And there’s always trouble with the word ‘best’. That said, we’re not gonna leave you hanging.

We asked some of our community’s most avid runners about Berlin’s best running routes. After some thought (and scrolling Strava), they came back with a selection of runs worth lacing up for. All the classics are there – from Tempelhof to Treptower Park – plus some off-piste goodies like Panke and a trail-track-stair combo at this, like, UFO that won a bunch of architecture awards. In other words: not boring. Whether you’re looking to chill out or be challenged, to tread dirt, road, or rubber, check out our Braves-curated list of Berlin’s best running routes…

The quintessential city escape. Grunewald offers pretty much everything a runner could wish for: asphalt, hard ground, soft ground, hills, stairs, and several lakes for muscle recovery. The paved Krone section is great for smashing PBs while the winding trails are ideal for more leisurely runs. Highlights include the hills of Havelchaussee (paved), several lakes, a natural drinking water fountain, Teufelsberg, the FKK (nude) beach at Teufelsee, and dogs. Dogs everywhere. Pause for a beer at the Grunewald Tower or simply quit there and walk back to the nearest transit stop.

Can’t be fussed to find a route? All good. Take the S-Bahn to either Grunewald or Schlachtensee station and see where your spirit takes you. Freestyling your way through the forest is half the fun. Here’s how Nele does it, starting at S-Bahn Grunewald:

Staying in Grunewald, Seb recommends a three-lake loop around Grunewaldsee, Krumme Lanke, and Schlachtensee. Lush and lively in the summer, there are plenty of spots to post up for a swim. Take the train to S-Bahn Grunewald and then make your way to the top of Grunewaldsee. From there, run in either direction, do a figure-8, whatever. Lots of room for improv along the way. Here’s how Seb, aka Captain Bubbles, does it:

For a shorter version (8km), skip Grunewaldsee and do it like Lena, starting from a nearby U-Bahn station like Krumme Lanke or Onkel Tom’s Hütte (which our homie Moses argues should be renamed):

Another of the city’s green lungs, Treptower Park is a short run from Friedrichshain, Kreuzberg, or Neukoelln. Even the few kilometres from Mitte or Prenzlauer Berg are worth it. Starting from S-Bahn Treptower Park, you can extend the route to include Plaenterwald for a nice 8-kilometre loop. The waterfront promenade along the Spree is a treat on nice days and can be used for wind resistance training on bad ones. Paths jutting off in all directions give the impression of limitless possibilities. Take them, see what happens. Probably, you’ll stumble upon the abandoned amusement park. Back when Berlin was cool, you could go in there and stunt but now there’s a big fence and big fines so best bet is to just run past it, which is also cool. Meanwhile, Insel der Jugend is a picturesque little detour to take en route and the imposing Russian War Memorial is always worth being humbled by. When you’re done running, you can hit the bushes and pick wild garlic like it’s a lockdown. A wholesome experience all around.

Here’s how Nele does it, starting in Prenzlauer Berg:

The abandoned airfield is a staple of every list about Berlin, and a roundup of Berlin’s best running routes is no exception. Fun fact: the Braves sports club was originally founded nearly 70 years ago by members of the American military who were stationed at Tempelhof after the Second World War. Other important things happened here too, which we invite you to Google. Today, the site attracts literally every type of person and purpose, including running.

Circling the field is a six-kilometre paved trail, which local legend claims to be exactly 10,000 steps. If you’re not keen to run in a giant oval, there are two regulation-size airport runways to do intervals on or whatever. Just watch out for the kite skaters. And twerking teens. On top of the people watching, part of what makes Tempelhof special is its eternal horizon. This deep distance is also what can make running here so frustrating. It can be difficult to feel like you’re making progress. Someone once told me going for a run at Tempelhof must be how Bill Murray felt in Groundhog Day.

If you’re into hills, look no further than Humbolthain. We like to kick off from Monbijoupark and get some kilometres in before getting sadistic. Namely, hill sprints. Torturing ourselves up the 200-metre hill to the peak of Mount Humboldthain has become somewhat of a weekend tradition for us. Post-run pastries are earned, not given, right? Sometimes one hill sprint is enough, sometimes we do them until someone is actually having a bad time. Do what works for you. When you’re done and dead, jog back to Monbijoupark via the Park am Nordbahnhof or see what’s good in Wedding. Better yet, why not join us on Saturday mornings? They usually end with coffee and donuts.

Intervals are a special kind of torture but they also come with plenty of breaks. And while hitting a track is the logical choice, doing intervals riverside is the aesthetic one. Our Spree run starts at the Pergamon Museum and heads west for 5 kilometres on the north side of the river before making a U-turn and heading back on the south side. Highlights include views of the Reichstag, government district and surrounding greenery, winding river, and Hauptbahnhof with that cool new cube in front of it. Go at sunset for something special.

Admittedly not a hot spot of happenings, Lichterfelde nevertheless holds plenty of appeal for runners thanks to the paved path along Teltowkanal. Kick off from Stadtpark Steglitz and make your way south before looping back after about 7 kilometres. Or keep going… and going… and going – the canal leads all the way to Potsdam. From there, you can easily take the train to wherever you came from. Here’s how Seb does it:

This one has a little bit of everything. Start with some laps around the wood chip track in Volkspark Friedrichshain. There’s also a paved one if you wanna get speedy. Then head over to the Velodrom – you won’t see it right away because it’s in a crater atop a plateau – and sprint up and down the seemingly endless wall of stairs surrounding the premises. After that, go for a short run to the next-door sports complex on Paul-Heyse-Straße. The recently refurbished track is great for some more laps, or intervals if you feel like switching it up. Finally, head north to Volkspark Prenzlauer Berg for a relaxed run through its uncrowded rolling meadows. The sheer versatility between the parks make this one of Berlin’s best running routes.

Highly underrated compared to the more popular Landwehrkanal further south, the Panke canal is a great way to see what’s up in Wedding. Start at Invalidenpark and head northwest until you meet the canal at Spielplatz Südpanke. Run on either side of the water until you get to Bürgerpark Pankow, which is hella nice and spacious. If you still have energy, extend the route to Volkspark Schönholzer Heide, which, like Treptower Park, is home to an impressive Soviet war memorial. Alternatively, head northeast until you reach the enchanting grounds of the Schönhausen Palace. Keep things fresh by running back on the opposite side of the canal you took on the way there.

Every Tuesday we hit the track on Lobeckstrasse in Kreuzberg. Keen to come? Just drop us a DM to let us know you’re game and we’ll tell you when to show up. Here’s a little preview of what does down courtesy of track coach Seb:

Wanna do your own thing? Our HQ (Wassertorstraße 11) is a great starting point for all kinds of runs: south to Tempelhof, north to the Spree, East along the canal, or West to Gleisdreieck park. For real, though, don’t be shy – Track Tuesdays are calling. You can always ask us more about Berlin’s best running routes when you’re there.