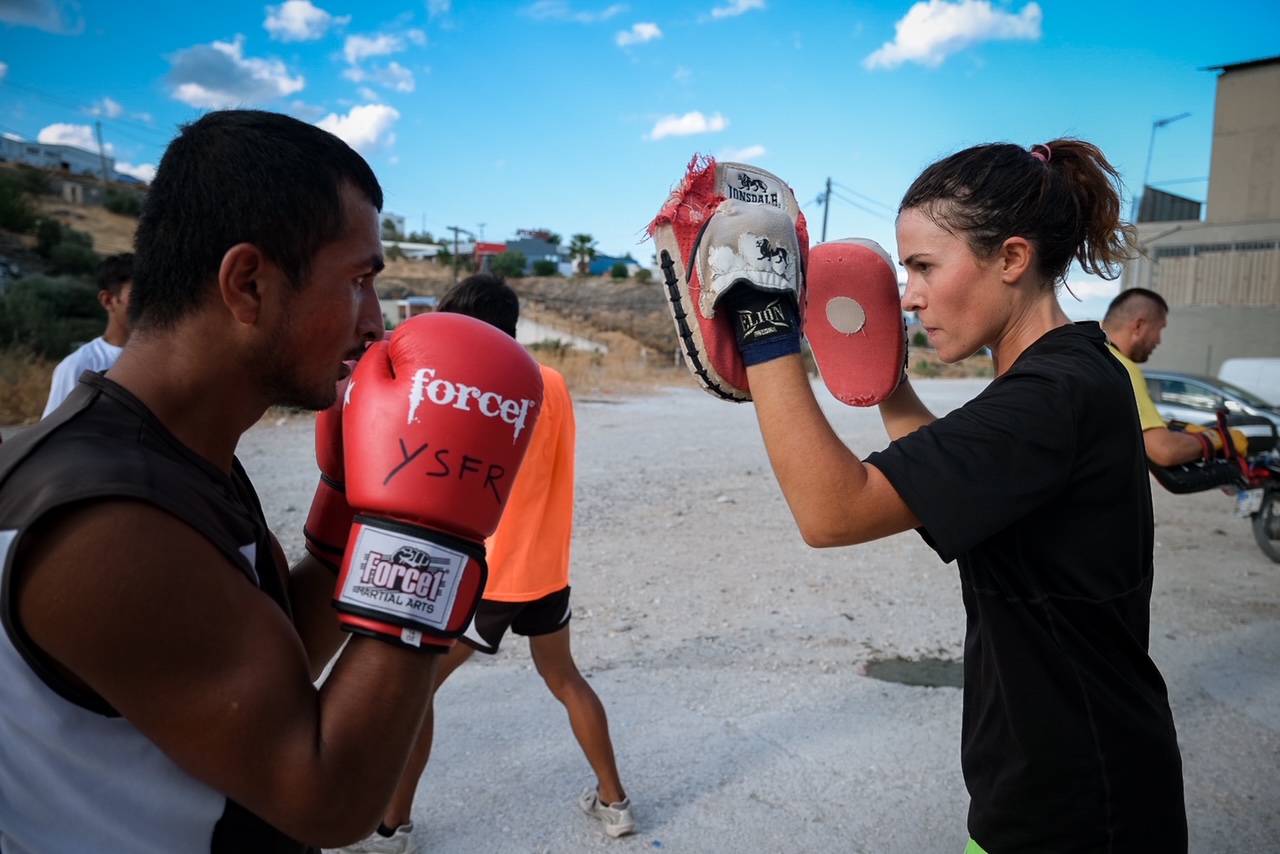 To celebrate womxn all around the globe, we’re focusing on femxle-owned projects and trailblazers from within our extended family. In our second round, we would like to give the platform to Estelle and her wonderful nonprofit organisation Yoga and Sport with Refugees. And our day-one, Suse, who is involved in project BORA e.V, a Berlin-based shelter for women. Their work ranges from providing shelter for womxn and their children who have experienced violent situations to counseling, child-raising, and housing assistance. Yoga and Sport with Refugees was founded in 2017 on the island of Lesvos in order to accompany refugees, dignify them, and defend human rights that are continuously abused in such camps. We’ll let Estelle and Suse take it from here.

Hi Estelle AND SUSE, Who are you and WHAT Do YOU DO?

Estelle: I am Estelle, 29 years old, half French, half Spanish. I have been running for over 10 years and it brought me peace, community, and confidence. Four years ago, I moved to Lesvos to help others. I am the founder of Yoga and Sport with Refugees; a non-profit organization that works singularly as our volunteer teachers are all from the refugee community. Resilience is everywhere in our movement but we always keep “never give up” and “stronger together” as our mottos.

I believe in a world where sports bond everyone through effort, happiness, endurance, and empathy. Caring for each other and putting ourselves in the shoes of others already makes a big step towards change.

Suse: I’m a 43-year-old woman living in Berlin since 1999. And much more: a daughter, a sister, a cousin, an aunt, a friend, a partner, a founder, a CFO, a colleague, (not) a coach – that’s a running gag with my softball team. But also chairwoman in two very different organizations and member of two more. Oh, and a godmother, a dog-sitter, and probably a few more things depending on who else you ask. I try to fill out all these roles and would summarise what I do as juggling my company and my friends & family with sports, social commitments, and the love of my life. I believe in sharing my own good fortune, in listening more but speaking up when necessary, and in being a role model. It’s also important for me to learn from those around me.

What is your definition of womxnhood?

Suse: I’d like to take one step back first and clarify that “womxn” is every person, who identifies themselves as such. I learned this from the women’s project BORA e.V and have adopted this definition. So, for me womxnhood is not biological. It can include mothers, it can include “career women” – and everyone in between. But it also encompasses womxn who (chose to) live childfree and womxn who were born with male genitals and choose to belong to the female gender. I do not believe that there are character or quality traits in people that are specifically feminine or masculine. If you choose to define yourself as a womxn, I will support this choice. regardless of your genitals, haircut, dress-code, behaviour or any other (stereo-)typical or atypical female attributes.

Estelle: Many women would feel different about womanhood. For me, it’s having confidence, humanity, and caring for others with love. It’s being able to think that you are who you are, and equal to others.

What empowers you as a womxn?

Estelle: I am a peaceful fighter. I can find solutions, or ways of understanding each other when the situation turns out to be complicated.

I am also able to fight with keeping a calm mind and energy for reaching my goals, in sports and in life. I’ve been living with people who are fleeing from their countries and have to go through many obstacles for 4 years. I feel empowered when, through sports, I can give them hope, peace of mind and I see them grow stronger.

Suse: My community. This includes family, friends, my partner, colleagues, team, and various club members. I feel empowered when I’m accepted for who I am – with my compassion for others, my forgetfulness of facts, my short hair, my ambition, my independence, my choices in life. And I hope that with my commitment to my work as co-founder & CFO of MOSECON; BORA’s chairperson, coach of the BERLIN brats, a middle-aged runner with the Braves, I can empower others, too.

PUBLIC NARRATIVES TEND TO EXCLUDE WOMEN. WHICH FXMALE STORIES WOULD YOU LIKE TO HEAR OR SHARE MORE?

Estelle: I would like to hear more of the stories of women and girls like Sohaila, Mohadese, Mobina, and their mothers: they are unconditionally strong women. They are all from Afghanistan. They crossed 4 different countries to escape from war and persecution. They’ve lost their father, their husbands, but they kept going with hope and resilience. They lived for over a year in Moria refugee camp, a place which was nicknamed “hell on earth“.

Now, they are rebuilding their life everyday: they study harder than anyone. They train as hard as their male partners during the Muay Thai sessions, (and they do not care about being mixed with men, it makes them feel more powerful as well during sparring sessions). They raise awareness for the rights of Afghan women. These women are the future of our world.

Suse: Definitely more of Jacinda Ardern, who’s only the second Head of State (after Benazir Bhutto), who is turning stereotypical gender roles upside down by having a baby as well as a highly competitive and responsible job. She shows a full range of emotions, gets things done and isn’t intimidated by the male-dominated work environment.

On the other hand, I’d like to share stories of friends who’ve chosen a lifestyle that might not adhere to the norm and thus show others that it can be done. For example, my lesbian friends with two kids, leading a life that is not different from most other family lives that I know. Or my softball friend or other friends who followed their dreams and overcame severe anxieties. Or my friends who followed their dreams and moved to the other side of the world, gave up a secure job, and filmed a documentary in a post-war country. I would also like to hear more of the women that I accompanied for a year as a translator during their stay at the women’s shelter in Berlin.

Can you name a moment that made you realize what the power of a womxn is?

Estelle: When I met Nadia Ghulam in 2019 and when I read her story. She is an Afghan woman who provide for her family by disguising herself as her brother to be able to work in the city. She suffered severe burns when a bomb fell on her house in Kabul in 1993. A few months later her brother passed away in a Taliban attack. She made the choice to hide her gender in order to keep her family alive.

She now lives in Spain, wrote several books, and created an organisation to help refugees in Spain get education and to help girls in Afghanistan to study. These are the types of stories that inspire Yoga and Sport with Refugees.

Suse: Yes. A few years back I attended an event organized by the International Women’s Forum. In the room were about 800 attendees from 40 countries, of whom about 95% were women, and the only men were either “the plus one” or a rare speaker. The power in this room was incredible! Everyone I met was open, friendly, and supportive, but truly no-nonsense and straight to the facts. They get things done and break ceilings by persevering and help others along the way.

What are the main challenges that you face as a womxn in our society?

Suse: One of the main challenges I face is not being taken seriously, regardless if it concerns sports, work, or even family matters. At the same time, I actually like to be challenged and I’m not afraid to ascertain myself in the often male-dominated circles that I’m dealing with.

Estelle: Men see me as weaker than they are. But I know how to prove them wrong during training. I never give up.

In general, I feel very powerful to be a young woman and I tell myself everyday that I am very lucky to be the person I am.

Our society brings many challenges in front of us, but we can help each other to overcome them, and that’s my purpose. I want to continue helping other women to feel stronger, and completely equal to men.

THANK YOU: Estelle AND SUSE

Check out our other womxn-focused initiatives, like The Femxle Side of Things with Roli-Ann and Ireti, Nina and Heidrun, and Bene and Lena.